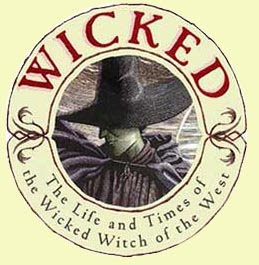 Wicked: The Life and Times of the Wicked Witch of the West
by Gregory Maguire

Summary from the publisher:
When Dorothy triumphed over the Wicked Witch of the West in L. Frank Baum's classic tale, we heard only her side of the story. But what about her arch-nemesis, the mysterious witch? Where did she come from? How did she become so wicked? And what is the true nature of evil?

Gregory Maguire creates a fantasy world so rich and vivid that we will never look at Oz the same way again. Wicked is about a land where animals talk and strive to be treated like first-class citizens, Munchkinlanders seek the comfort of middle-class stability and the Tin Man becomes a victim of domestic violence. And then there is the little green-skinned girl named Elphaba, who will grow up to be the infamous Wicked Witch of the West, a smart, prickly and misunderstood creature who challenges all our preconceived notions about the nature of good and evil.

Kirkus Reviews, 09/15/1995
Maguire, up to now a writer of kids' books, turns his considerable child-captivating skills to adults--and adult children--in this magical telling of the land of Oz before and up to the arrival of Dorothy and company. While perhaps not quite as wonderful a land as Alice's, Maguire's Oz is magical and intriguing, and he adeptly fills in the ""historical"" background of talking animals, tin woodsmen, flying monkeys, and rejoicing Munchkins without it ever seeming familiar or contrived.

In Munchkinland, a green-skinned baby is born to an often absent missionary preacher and the often drunk heiress to the county seat, neither of them Munchkins themselves. Baby Elphaba's parents' habits being what they are, though, her true father long remains a mystery--as it does for her sister, Nessarose, born two years later with pink skin but sans arms (magic red shoes will later enable her to walk without assistance). The girls grow up and attend the university, where Elphie, always the outsider in her verdant skin, is bright, sharp-tongued, and aloof. Nessie, unable to touch, has chosen an untouchable world and lives her life in religious sanctimoniousness. Elphie's roommate is--perfectly--Glinda, a dippy, well-intentioned debutante sort majoring in sorcery. Meanwhile, the school's frightening headmistress places a spell on the girls and assigns each of them a quadrant of the land, leaving one unattended. Elphie is conscientious and honest, hardly a witch and certainly not evil, but her life unfolds along a path that is well laid out, though not by her.

Her journey along this road is a captivating, funny, and perceptive look at destiny, personal responsibility, and the not-always-clashing beliefs of faith and magic. Save a place on the shelf between Alice and The Hobbit.


SPOILER WARNING: This next review might give away some detail you wish you hadn't seen if you haven't finished the book yet!
The New York Times
October 24, 1995
Let's Get This Straight: Glinda Was the Bad One?
by Michiko Kakutani

The Wicked Witch of the West revealed as an idealistic victim? The green-skinned harridan played by Margaret Hamilton unmasked as the dermatologically challenged product of a dysfunctional family? The scourge of Oz depicted as a dissident, a brave fighter against a totalitarian regime?

At first Gregory Maguire's "Wicked" sounds like a joke, like a satire from James Finn Garner's "Politically Correct Bedtime Stories," but we soon realize that Mr. Maguire is deadly serious, and that he has produced a book that's deadly dull. His theme seems to be that "people who claim that they're evil are usually no worse than the rest of us."

"It's people who claim that they're good, or anyway better than the rest of us," a character says, "that you have to be wary of."

Certainly as one of America's most beloved classics of children's literature, "The Wonderful Wizard of Oz" is a natural target for literary recyclers. But unlike Geoff Ryman, whose 1992 novel, "Was," used the story of Dorothy's adventures in Oz as a jumping-off point for a thoughtful meditation on the enduring power of fantasy and art, Mr. Maguire shows little respect for L. Frank Baum's original story. Rather than cleverly build upon it or ingeniously send it up (as Donald Barthelme did, say, with "Snow White"), Mr. Maguire simply uses Baum's most famous characters as fodder for his own philosophizing. His alterations, annotations and embroideries have so little to do with the original story that they're neither amusing nor provocative; to make matters worse, they're relentlessly politically correct.

In Mr. Maguire's retelling, the Wicked Witch of the West wasn't wicked, just misunderstood. Glinda, the Good Witch, was a sanctimonious socialite obsessed with money and status. And the Wizard of Oz was an out-and-out tyrant, a sort of combination Hitler-Stalin-Darth Vader, who instituted pogroms against minority groups and enforced his despotic rule with pillaging storm troops.

As Mr. Maguire tells us, the Wicked Witch of the West was once a little girl named Elphaba (or Elphie, for short), who was born to a priest's promiscuous wife in a ramshackle hamlet in Munchkinland. Her green skin made her an instant pariah. Her own mother thought of drowning her; her father said she was "born to curse my life." She was mocked by other children and called all manner of names: the "little demon," "the little monster" and "lizard girl." She grew up with a younger sister named Nessa, a beautiful armless girl who thought of herself as a saint.

In time, Elphie goes off to school, where the other girls make fun of her looks and ugly clothes. She has become a Holden Caulfield-sort of adolescent: sensitive, moody and suspicious of phonies. Of those phonies, her roommate, Glinda, is among the worst: snooty, vain and spoiled. Though the two girls become friends for a while, though Elphie will do her best to broaden her roomie's outlook, the beautiful Glinda will later revert to her selfish ways.

Elphie has always been a fierce, idealistic girl, and she soon becomes involved in the fight for Animal rights. It seems that the Wizard of Oz has restricted the freedom of Animals and is threatening to turn them into chattel, slaves who can actually be owned and bartered by others. Elphie begins working in secret with her favorite teacher, Doctor Dillamond, a Goat, who is conducting scientific research to prove that "there isn't any inherent difference between humans and Animals." He dies under mysterious circumstances, and Elphie becomes convinced that he has been murdered, perhaps by the headmistress of the school, Madame Morrible, who has tried to recruit Elphie, Glinda and Nessa as secret agents for the Government.

Having become thoroughly radicalized, Elphie drops out of school, becomes an anarchist and goes underground. After her lover, Fiyero, is killed, she joins a nunlike order of "maunts" and takes care of the ill and dying. A long journey that eventually results in a visit home, however, will leave Elphie increasingly disillusioned and paranoid, and she will embrace her destiny as the Wicked Witch of the West. Her antipathy toward Dorothy, Mr. Maguire suggests, stems from Dorothy's possession of Nessa's magical shoes and from Elphie's own sense of identification with the young girl from Kansas, from her realization that "Dorothy reminds me of myself, at that age."

Although Mr. Maguire demonstrates a knack for conjuring up bizarre adventures for Elphie and introducing her to an eccentric cast of creatures (though nowhere near as enchanting as the many creatures Baum invented in his multiple sequels to "The Wonderful Wizard of Oz"), his insistence on politicizing Oz and injecting it with a heavy dose of moral relativism turns a wonderfully spontaneous world of fantasy into a lugubrious allegorical realm, in which everything and everyone is labeled with a topical name tag.

His ponderous language underscores this ideological impulse, and further weighs his story down. Elphie says things like, "There's nothing ontologically interesting about magic." And she and the other characters spend pages and pages debating things like the nature of good and evil, and the difference between sorcery and science. Dorothy's ruby slippers are now referred to as "the totemic shoes" and the Emerald City is described by Glinda as "juvenile" and "devoid of irony."

"You have no sense of the pitch of unrest to which things have mounted," Madame Morrible says at one point. "Setting communities on edge, ethnic groups against one another, bankers against farmers and factories against shopkeepers. Oz is a seething volcano threatening to erupt and burn us in its own poisonous pus."

Such passages only make the reader long to return to the original Oz, the Oz invented by Baum nearly a century ago. As Dorothy said in the movie: "There's no place like home. There's no place like home."
~~~~~~
In response to the question in the first comment and answered in the second comment, I am posting the links here, where a click will open the webpages:
Posted by Logue Librarians at 4:01 PM 4 comments: