As you begin your research using Logue Library's web page, please note that access to many of our resources are limited to the faculty, staff and currently enrolled students of Chestnut Hill College. If clicking a link presents you with a box like THIS: 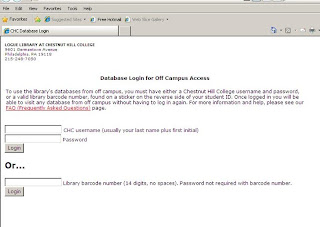 Enter your CHC email username & password OR your library barcode number in the appropriate boxes. Come to the library's circulation desk to receive a barcode sticker for the back of your student ID.

We are here to help guide you through your research and welcome your questions. See any one of us, or type a question in the Meebo box for answers to quick questions. If you would like to spend a bit of time with one of us working on your research, ask to schedule an appointment, and we will sit with you for an entire hour if you need it.

We hope you have a very enjoyable & successful semester at Chestnut Hill College!

It is amazing what you learn to do at library school these days . . .

One teacher from each of the Philadelphia School District schools is honored. Chestnut Hill College alumna Claudia DiCrosta was among them.

Claudia DiCrosta was born and raised in Portugal. She holds a bachelor's degree in Spanish from Chestnut Hill College, where she minored in secondary education and psychology. Her first teaching position was at William Penn High School. Moving to Swenson Arts and Technology High School in 2006, she demonstrated her commitment to its students from the first day. She also mentors Temple and La Salle University students who are prospective Spanish teachers.

Posted by Logue Librarians at 3:30 PM No comments: 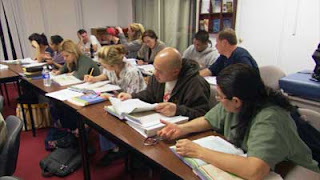 These billion-dollar businesses are cashing in on a boom in degree-seeking non-traditional students . . . those who are already established in the workforce and are looking to upgrade or change careers.

From unsavory sales practices to fraudulent degree programs, students have a lot of homework to do before deciding to go this route.
Posted by Logue Librarians at 1:12 PM No comments:

The REAL Reason We Have a Blog!

We feel your pain. We live it, too. That is why we created this blog three and a half years ago. On the left side of the page we have listed links to the most used journal article resources we subscribe to, the library's catalog, and a link to an alternative to our Web Resources pages. We use the bookmarking website "Delicious" for that.

We feel your pain.
You can also IM a librarian in the chat box under the links.

Please don't forget that this is here as an alternative! And if you were looking for an easy "'dog ate my homework'-for-the-21st Century" excuse to not have your work done... well, sorry about that!
Posted by Logue Librarians at 1:27 PM No comments:

Student Research in the Spotlight... From Today's Philadelphia Inquirer

Today's paper contains an excellent example of the impact student research can and does have on society and politics. Imagine the implications of YOUR research as you delve into your Senior Seminar project!

Last year, an 11th-grade student of mine wrote a paper examining the controversy over interracial marriage from the mid-1950s to the mid-'70s. My student, Susannah Ivory, wanted to know more about the public debate surrounding Loving v. Virginia, the 1967 Supreme Court decision that unanimously struck down laws banning interracial marriage.

To keep the project manageable, Susannah restricted herself to one newspaper, the New York Times. She ran a search of its historical database for all of the items in which miscegenation or interracial marriage were mentioned during the two-decade period. Since the advent of digitized, online newspaper archives, data of this sort can be gathered in minutes; research opportunities are limited only by a student's ability to pose good questions.

A graph of the results showed two striking peaks: a big one in the mid-'60s, which was no surprise, and a completely unexpected bump in 1956 and '57. The articles revealed that the mid-'50s spike stemmed from the relaxation of censorship laws prohibiting the depiction of interracial relationships in books and films. For the first time, the public had an opportunity to experience and react to this type of integration - a decade before the Supreme Court got involved.

A typical 1958 article began, "A new novel by Legette Blythe titled Call Down the Storm is planned for publication next month by Holt. It is a story of miscegenation and racial integrations from the closing years of the Reconstruction period to the present."

Mentions of miscegenation disappeared almost completely from the Times by the end of the decade, but they resumed again in the early '60s as couples began to challenge the laws against interracial marriage in state courts. This time, higher-profile individuals and groups began to weigh in.

"Interracial marriage is completely compatible with the doctrine and canon law of Roman Catholicism, a national church organization said today," one 1963 article read. " 'Races do not marry,' the statement declared. 'Nations do not marry. Classes do not marry. Only persons marry.' " So much for President Truman's claims, two months earlier, of biblical prohibition.

In 1964, an article reported that a group of scientists working for the United Nations had issued a study stating "there is no biological justification for banning interracial marriages, nor for any advice aimed at banning them."

Susannah ended her paper with a reference to our own era: "The striking down of the anti-miscegenation laws represented a major step forward toward a more open and accepting society, but the time has come again for such a leap. Homosexual couples are now in the same situation that mixed-race couples were a half-century ago, and they face the same challenges."

In Loving, the court wrote, "Marriage is one of the 'basic civil rights of man.' ... To deny this fundamental freedom on so unsupportable a basis as the racial classifications embodied in these statutes ... is surely to deprive all of the state's citizens of liberty without due process of law." It doesn't seem like much of a stretch to suggest that these sentiments could apply to same-sex couples.

Today, the United Nations and the Catholic Church both find themselves involved in the debate over same-sex unions. Two years ago, on the 60th anniversary of the Universal Declaration of Human Rights, a headline read, "In Europe, same-sex showdown moves to U.N." The accompanying article noted that 27 European countries supported a new declaration decriminalizing homosexuality, but the Vatican was resisting it. The Bush administration refused to sign on to that declaration, but the Obama administration joined 70 or so countries in supporting it last year.

Not surprisingly, the most cogent arguments in favor of personal freedoms often come not from governments or organizations, but from the individuals fighting for them. From a 1972 article, Susannah quoted the black mayor of Tuskegee, Ala., who was married to a white woman.

"A lot of things went through our minds," he said. "We felt there might be actual physical danger. We thought about hurting our friends and relatives. We even thought about the effect it would have on my political career. Finally we came to the point and said, 'To hell with it. I love you, and you love me. We're going to do the only honest and right thing.' " Sometimes it's that simple.

Grant Calder teaches history at Friends' Central School. The full text of the paper is available at researchproject.friendscentral.org.
Posted by Logue Librarians at 11:13 PM 3 comments: