The Presidential Inauguration - Some Interesting Facts 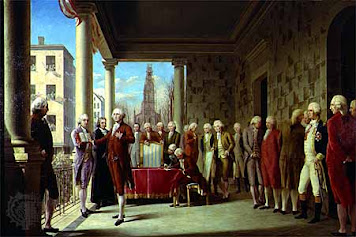 On January 20, 2021 at noon there will be a ceremony to swear in the President of the United States. The first Presidential inauguration that of George Washington, took place on April 30, 1789. All inaugurations from 1793 until 1933, were held on March 4, unless it was a Sunday. After a change to the 20th Amendment of the U.S. Constitution Franklin D. Roosevelt was the first president to have his inauguration ceremony on Jan. 20 in 1937. New Presidents have also been sworn in at other times upon the death of a sitting president or when President Nixon resigned in 1974.

Why Does Inauguration Day Fall on January 20th?

This Presidential election cycle and transition has definitely been long, difficult and very eventful. Perhaps one the most eventful. Inauguration days have been eventful also. But a peaceful transition has always been a bulwark, a strong support or protection of American Democracy. May it always be so.

We do not yet know what forms the Inauguration ceremony, parade or balls will take this year given the current pandemic and climate of unrest.  But here is a look at some times past.

The bitter 1800 Presidential election destroyed a friendship which was not repaired until the former friends were old men.  Adams also angered Jefferson by filling the Chief Justice of the Supreme Court position just before leaving office.  In the middle of the night before Jefferson's inauguration, President John Adams took an early stagecoach out of Washington back to Quincy, Massachusetts and was not present during the ceremony.  The two men would not exchange another word for 12 years. But then they began a famous correspondence recreating their bond.

An inauguration is associated with parties and dances called inaugural balls and parties.  But nothing tops the party on March 4, 1829 at the White House Open House when Andrew Jackson became President.  The crowd of admirers was huge and they backed Jackson against a wall.  The new President fled the scene back to the hotel he had stayed in before the ceremony.  White House furniture and china was destroyed in the crush.  To keep more people from entering the building staff passed the free food and drink out to the people outside.  There are varying accounts of rowdy the party was but all agreed it was memorable.

The Story of the Wildest party in White House History 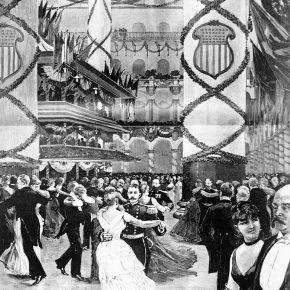 "For the occasion of James' inauguration in 1809, a Navy captain asked Dolley if a formal dinner and dance could be thrown in the couple's honor.  Upon saying yes, Dolley approved the tradition of the inaugural ball that continues to this day." 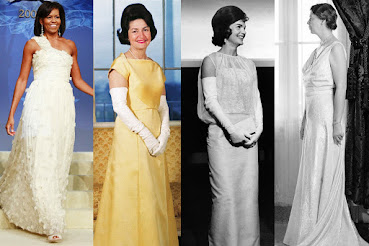 The Inaugural Ball Gowns (or another dress if there was no ball gown before inaugural balls became a regular occurrence) of the Presidential First Ladies are on display at the National Museum of American History, the Smithsonian in Washington D.C.

Another dress is selected if there was no ball gown. Inaugural balls have been a regular part of modern-day inaugurations but that wasn’t always the case.

The First Ladies, National Museum of American History, the Smithsonian

The exhibition features more than two dozen gowns from the Smithsonian’s almost 100-year-old First Ladies Collection.  To date the Presidents have been male so the presidential spouses have been First Ladies. When there was no spouse often another relative served as “hostess” at the White House. The role of the First Lady, an unpaid position, has grown considerably. There is money allotted for a staff for a First Lady’s office.

Inaugural parades are now big events requiring tremendous planning including security precautions.  The first organized parade was for James Madison in 1809.  There had been informal processions before.

William Henry Harrison had ridden up Pennsylvania Avenue on a white horse to take the oath of office on March 4, 1841. He wore no gloves or overcoat despite the freezing weather. He said he was as pleased with the presidency “as a young woman with a new bonnet.” In the cold drizzle he delivered an inaugural address that lasted almost two hours. He took to his bed afterwards. Harrison died of pneumonia just one month later. His tenure is the shortest of any U.S. President. His grandson Benjamin Harrison would become President in 1889.

William Harrison: Death of a President

When Ronald Reagan was sworn in at his inaugural ceremony the temperature was a dangerous 7 degrees Fahrenheit.  The ceremony could not be held outside as it usually has been.  The parade had to be cancelled.

Man of the People: The Walk 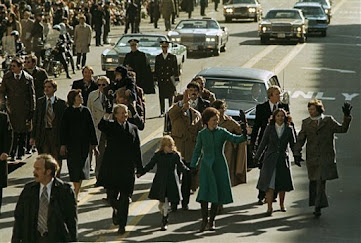 Jimmy Carter started the tradition of getting out of his vehicle during his inauguration parade in 1977.  He and his wife Rosalyn walked more than a mile to the White House.

Between the time of Abraham Lincoln won his first Presidential election on Nov. 6, 1860 and his inauguration on March 4,1861 seven Deep South cotton states—South Carolina, Mississippi, Georgia, Florida, Alabama, Louisiana and Texas—would secede from the Union, beginning the Civil War years. Lincoln was taking the reins of a nation that been in turmoil for years.

At Lincoln’s second inaugural on March 4, 1865 the Vice President-elect Andrew Johnson was recovering from a nasty bout of typhoid fever but was thought also to be intoxicated.

Johnson spoke in a slurred and incoherent fashion. Hannibal Hamlin had been Vice President in Lincoln’s first term.  For his second Presidential election contest Lincoln had tried to balance his ticket (list of candidates) with a Southerner and a Democrat, even though Lincoln was a Republican. The nation was still in the turbulent time of the Civil War.

What is the Oath the New President Takes?

The Oath of Office

"So Help Me God" and the Presidential Oath

Videos based on this blog's topic..

Books in Logue Library based on this blog's topic..

Thank you to the following Logue Librarians with helping me with this blog:

Posted by Logue Library at 2:14 PM No comments:

The 25th Amendment - What you should know? 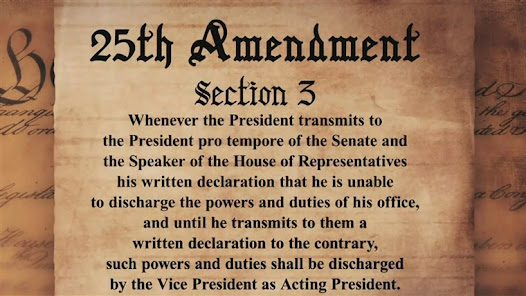 How the 25th Amendment Works

From the Constitution Center

The actual text of the Constitutional Amendment

Book in Logue Library based on this blog's topic..

What is the 25th Amendment? How Does it Work? An Animated Motion Comics Constitution Tutorial

Thank you to the following Logue Librarians with helping me with this blog:
Mary Jo Larkin, SSJ Dean of Library & Information Resources and Gail Cathey, Print Resources / Access Services Librarian with editing and research for this blog
Posted by J. Presley, Systems Management Librarian

Posted by Logue Library at 7:35 PM No comments: