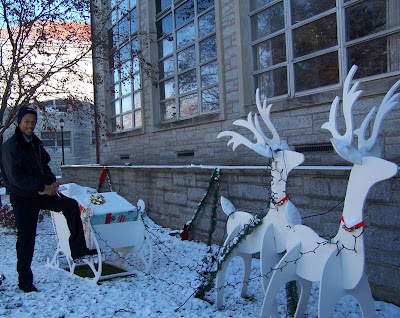 Santa is caught illegally parked in front of the library.
The tradition of decorating for the holidays at Chestnut Hill College began in 1924 and has been an "uninterrupted, living tradition" since. It started as a decorated tree and gifts for the sisters, and has evolved into an almost complete decorating of campus, inside and out.
Some years have been more elaborate than others. Griffins of Christmases past have used themes including a medieval cathedral in the Fournier Hall foyer, a Japanese "tree of light," "Babes in Toyland," Dickens-inspired themes (including Marley's ghost appearing from a dark corner), Camelot, and "White Christmas."