Merry Christmas from Logue Library - Plus a Christmas IQ Quiz!

Merry Christmas from the Logue Library Staff from 2019!

In this blog we will focus on the topic of Christmas Trivia.  Click on the video and see if you can answer all of the 10 questions in the quiz.


Here are some more online Christmas IQ Test that you can take as well!

Christmas is that time of year when Christmas Spirit becomes contagious.
As you can see from the pictures below, the excitement of the season is alive & well in Logue Library. 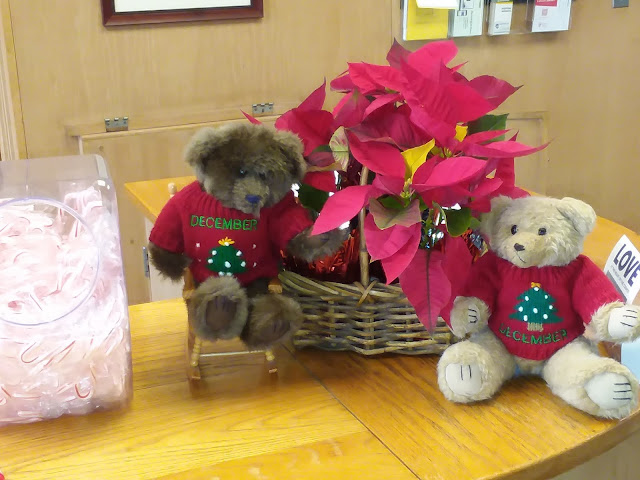 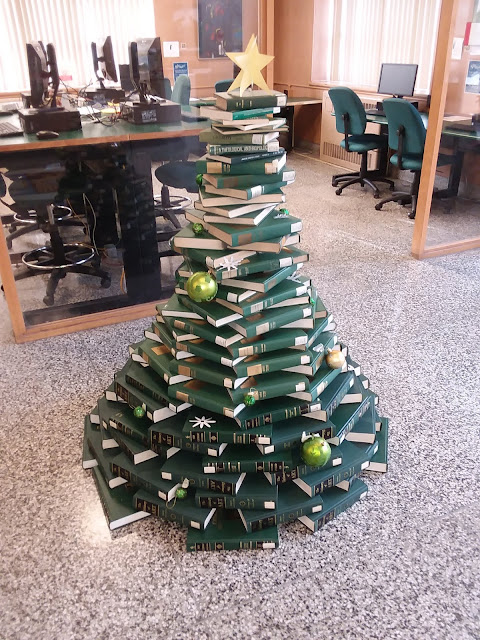 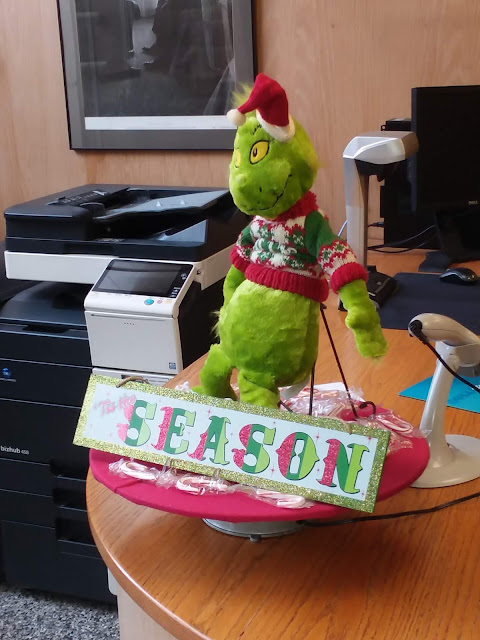 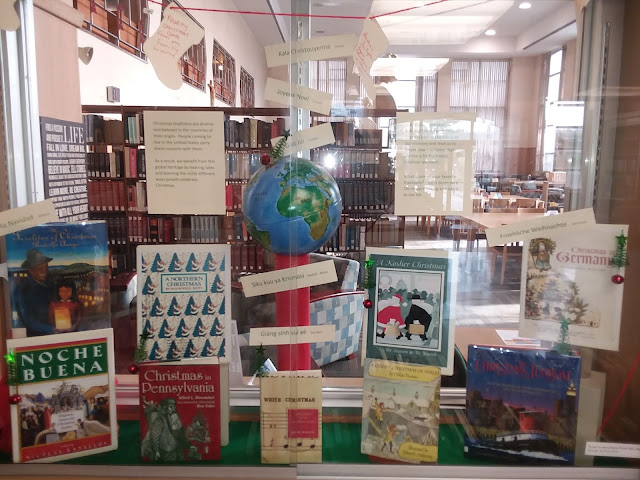 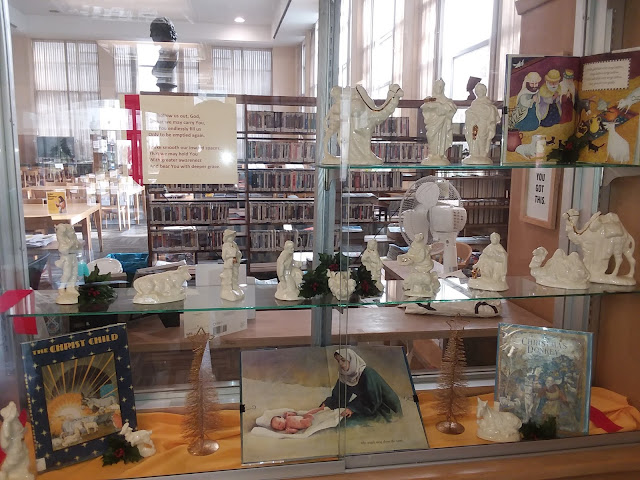 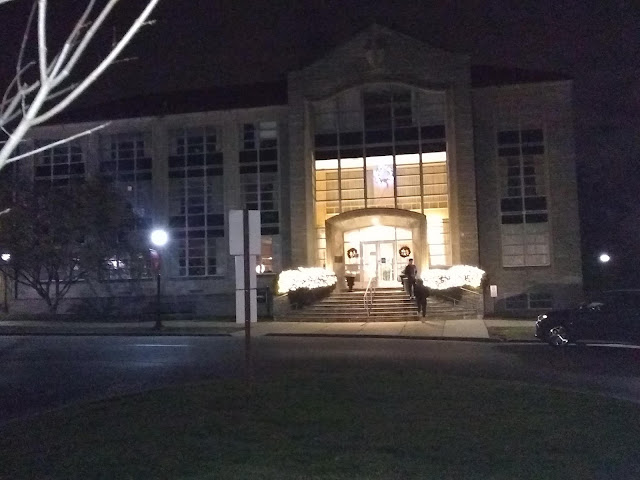 If you search on the topic of Christmas you will see over 29,972 results in our catalog which includes over 472 eBooks and 762 Books.

Here are a few of the books on this topic below:

If you search on the topic of Christmas Traditions you will see over 660 results in our catalog which includes over 30 eBooks and 24 Books on this topic.

What books listed above would you most likely read?

Special Thanks to Sister Mary Jo Larkin, Dean for Library and Info Resources  and Kelly Liberona, ILL Requests, Information Literacy and Outreach for creating the displays.


Posted by Logue Library at 6:38 PM No comments:

Time to "Give Thanks" for Thanksgiving! 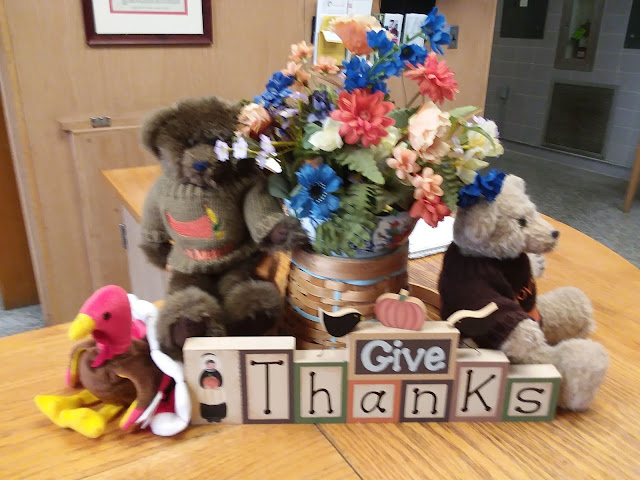 Turkey, stuffing or dressing..cranberry sauce,,.pies,,,calories...but who cares!
It is time for that Wonderful Annual Holiday Tradition of eating and being Thankful - called ...Thanksgiving...

For those of you who enjoy trivia, the website, All Parenting provided some Thanksgiving Quick Facts "Speed Round" shown below..

These facts will be great to use while your enjoying the day with your family.

·         Neil Armstrong and Buzz Aldrin's first meal in space after walking on the
moon was foil packets with roasted turkey.

·         The heaviest turkey on record, according to the Guinness Book of Records,
weighed 86 pounds.

·         Californians consume the most turkey in the U.S. on Thanksgiving Day!

years ago. It now sells $20 million worth of cream of mushroom soup.


If you search on the topic of Thanksgiving you will receive over 3,100 results in our catalog which includes 141 eBooks and 119 Print books on this topic.


Some of our books include:

Posted by Logue Library at 7:48 AM No comments:

Wizard Tournament in Logue Library until 11/3/19! 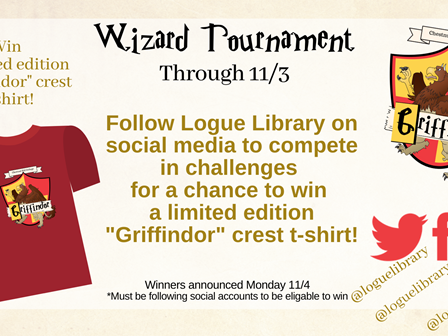 Posted by Logue Library at 6:08 PM No comments: 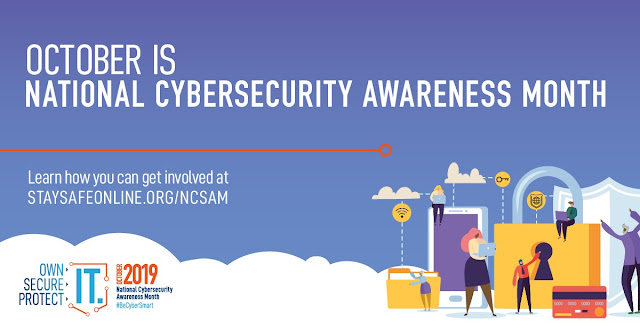 Data Breaches, Malware, Secure Passwords, Privacy, Safe Computing, Online Scams, Mobile Protection, Hacking, Phishing, Identify Theft and Bitcoin.  These are some topics discussed in the area of Cyber security.  So in this blog, we are going to discuss National Cybersecurity Awareness Month (NCSAM) which is held every October.

A NCSAM 2019 Toolkit can be downloaded  is  from Homeland Security.

Posters for NCSAM are also available to download as well.

According to the Homeland Security Website this annual event, “is a collaborative effort between government and industry to ensure every American has the resources they need to stay safe and secure online while increasing the resilience of the Nation against cyber threats. The Cybersecurity and Infrastructure Security Agency (CISA) and the National Cyber Security Alliance (NCSA) co-lead NCSAM.”  The Theme for 2019 is, "Own IT. Secure IT. Protect IT."

Much about how content is viewed or accessed over the Internet has changed. In fact Forbes.com wrote an article in December of 2018 called, "60 Cybersecurity Predictions For 2019."

One of the predictions in this article discussed employment and educational factors, stating that, “It’s no surprise that we are currently in a massive deficit of qualified cybersecurity talent. In 2019, we will see a more modern approach to recruiting and retention in the cybersecurity workforce to fill this void and create more diversity. We will see an uptick in apprenticeship programs, more diverse training, recruiting practices and federal funding to help bridge the enormous talent and diversity gap the industry has today“—Jason Albuquerque, CISO, Carousel Industries

Students at Chestnut Hill College  have the opportunity to learn about various topics in the field,Cybersecurity.

The Computer Information and Science Department  offers a variety of degrees related to Cybersecurity:

In the Spring of 2020 a new Accelerated, Online Master of Science Degree in Cybersecurity will begin as well.

A search of the following topics shown below you will deliver these results:


Logue Library has created a display to reflect the topic of Cybersecurity and how the Librarians can help students research their particular topics. 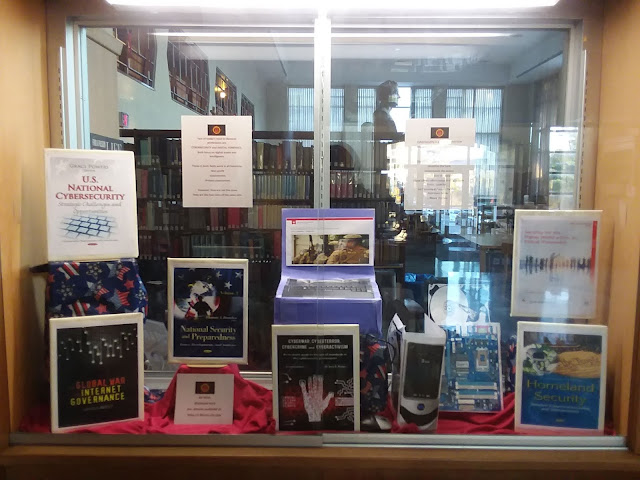 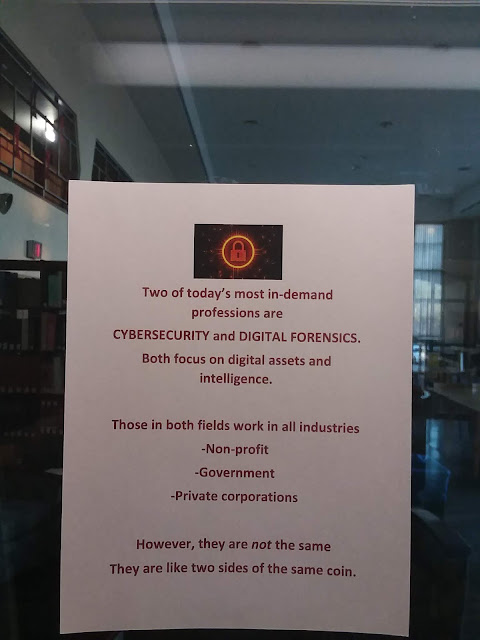 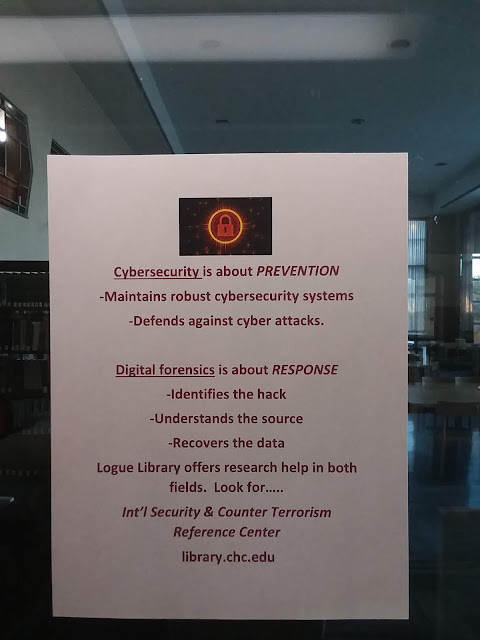 These eBooks are available to all students.


Posted by Logue Library at 5:10 PM No comments: 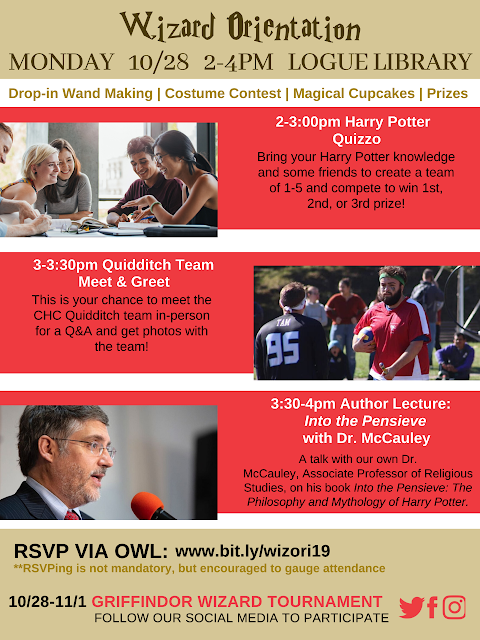 Links to the videos of this event are below!


Author, Dr. Patrick McCauley's, "Into the Pensieve: The Philosophy and Mythology of Harry Potter."

Posted by Logue Library at 10:52 AM No comments:

Our Harry Potter Display looks great in Logue Library!  Getting ready for Chestnut Hill College's annual "Harry Potter Weekend."
A schedule of events is shown below. 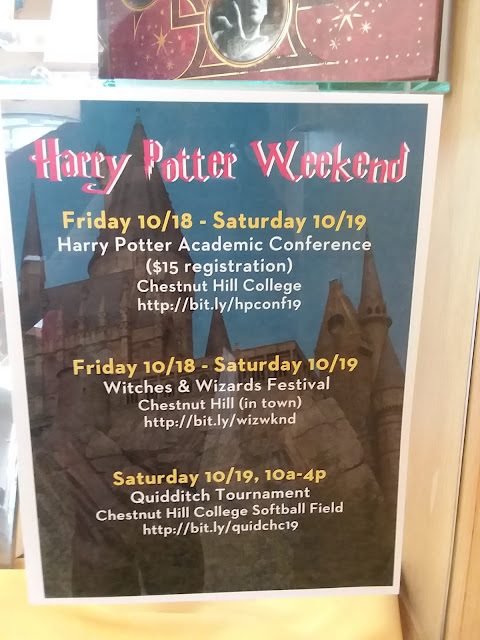 Stop into the library to see our display created by our Librarian, Kelly Liberona.  When asked why she chose to create this display she stated that,"

I’ve loved Harry Potter since age 8 when the story had first begun back in 1998. It really encouraged my love of reading. I got to grow up with the books as they were published. It’s such a great tale of good vs. evil, friendship, and love.
As you can imagine, I love working at the “Harry Potter school” where the similarities between Chestnut Hill College and Hogwarts are celebrated and explored. CHC has the same warm and welcoming feeling you get when you read about Hogwarts (or watch it in the movies). Chestnut Hill College [Hogwarts] truly is home for us Harry Potter lovers.  I wanted to give the library a bit of a magical feeling, so I strung the “floating” candles like the lobby is Hogwart’s Great Hall and culled my yard for the perfect sticks to create a realistic broomstick. The broom levitates mid-air as a tribute to our Quidditch Team.  Happy Harry Potter Weekend!" 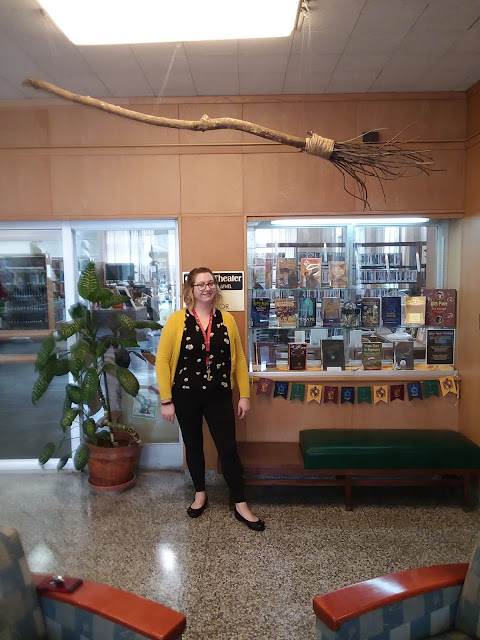 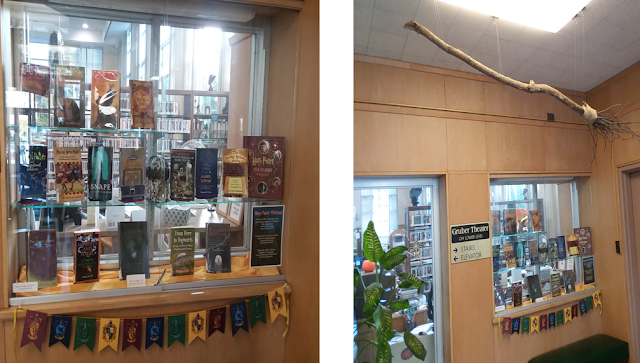 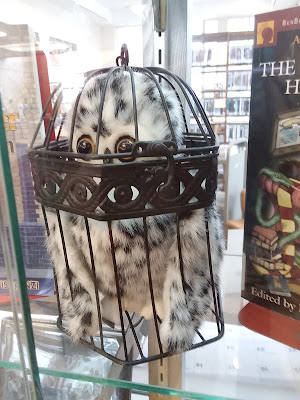 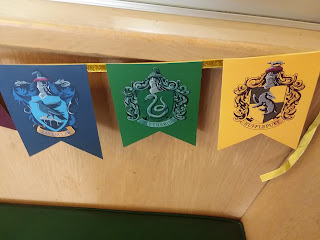 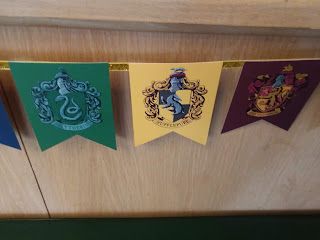 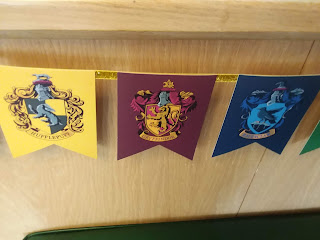 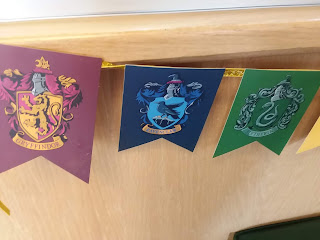 If you search the topic of Harry Potter you will find over 3,160 results in our catalog, this includes over 62 eBooks and 83 Print Books on this popular character.

Here are some of the books available in Logue Library:

Posted by Logue Library at 12:17 PM No comments: