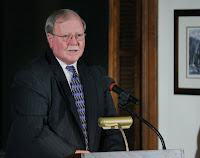 If anyone deserves a joyful retirement, it’s William T. Walker. For ten years at as Senior Vice President, Vice President for Academic Affairs and Dean of the Faculty, Dr. Walker has tirelessly led the way through a host of challenges and triumphs, including the organization of our Middle States re-Accreditation process, masterminding the strategic plan, and sensitively fostering curriculum development during the College’s transition to a co-ed institution. The college has hosted numerous academic conferences over the years, many spearheaded by Bill Walker, including the Legacy Conference Series: Kennedy Legacy Conference, 2003; Legacy of World War Two, 2005; and this year's Legacy of 1968 Conference. All these years, Dr. Walker has been a champion of the faculty and of the library.

(n) scholar, scholarly person, bookman, student; a learned person(especially in the humanities); someone who by long study has gained mastery in one or more disciplines

Dr. Walker is first and foremost a scholar and an educator. His devotion to the study of British history is well documented. Some suspect he even channels Winston Churchill! Dr. Walker’s first love has clearly been to learn and share knowledge with others. Even as an administrator at , carving out time to teach and mentor students has been extremely important to him. Certainly, this part of the job won’t end at retirement.

The English word for "retirement" comes from the French verb "to retire," retirer. It means to retreat or withdrawal. On this occasion, we think the Spanish have the better word, jubilación from the Latin jubilatio.
Jubilare is "to shout with happiness!"

In fact, we are very happy that retirement will not keep Bill Walker away from the library. Dr. Walker has seen Logue Library through some of the most transitional years since the invention of the printing press. (Ok, the library isn’t that old!) Through it all he has been an advocate for making the library a place that draws students in as well as serves their needs from a distance. He has never wavered in his support of growing acquisitions and, indeed, has probably donated half of his personal collection to the library. In addition, he is and always has been among those we can count on finding in the reference room, pouring through books and asking about articles on a regular basis. Therefore, the library’s director, Sister Mary Jo Larkin says, “It is most appropriate that the College has dedicated a room in the library as a tribute to this highly respected scholar-educator.”

The , located on the library’s second floor, is being named for him today, where we expect he will -- when he's not traveling or enjoying his grandchildren -- continue his research and teaching endeavors.