Half-way through this 20 minute video comes the startling statistic that only ONE PERCENT of the stuff we buy is still in use 6 months later! Everything that is wasted and exploited and polluted to produce and sell (and acquire) that cheap gadget is for NOTHING six months later, according to the statistics cited in this production.

From the Story of Stuff web page:
"From its extraction through sale, use and disposal, all the stuff in our lives affects communities at home and abroad, yet most of this is hidden from view. The Story of Stuff is a 20-minute, fast-paced, fact-filled look at the underside of our production and consumption patterns. The Story of Stuff exposes the connections between a huge number of environmental and social issues, and calls us together to create a more sustainable and just world. It'll teach you something, it'll make you laugh, and it just may change the way you look at all the stuff in your life forever." 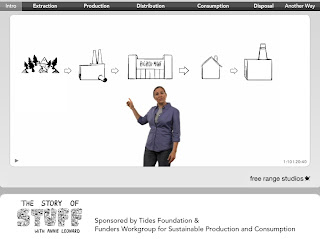 Your challenge is to verify the statistics in this production. Simply believing what you see because, "It's on the web, so it must be true!" gets first-time researchers in trouble all the time, and something as well-produced as this video might trip up experienced info-sleuths as well. On the other hand, maybe it's all true! You may find a fact sheet on the Story of Stuff website, but we need independent verification that the sources cited are credible and scholarly.

If you can do the best detective work and uncover the bare facts, detach them from the emotional content of the video, and tell us one way or the other if the information here is valid, you will win a gift certificate to Cold Stone. (Can you make it last six months?)

Here is a list of 10 statistics to verify. (Be sure to watch the video in order to understand the context in which the statistics are given.) The more y0u verify or refute, the better your chances of winning!

Give us the actual statistics and cite your sources, and give us a short sentence or two telling us if you think your research verifies or refutes the information in The Story of Stuff.

Deadline: May 1st! Submit your answers to librarians@ chc.edu

Posted by Logue Librarians at 10:05 AM 2 comments: